Pelvic Tilts & Their 20 Benefits for Beginners 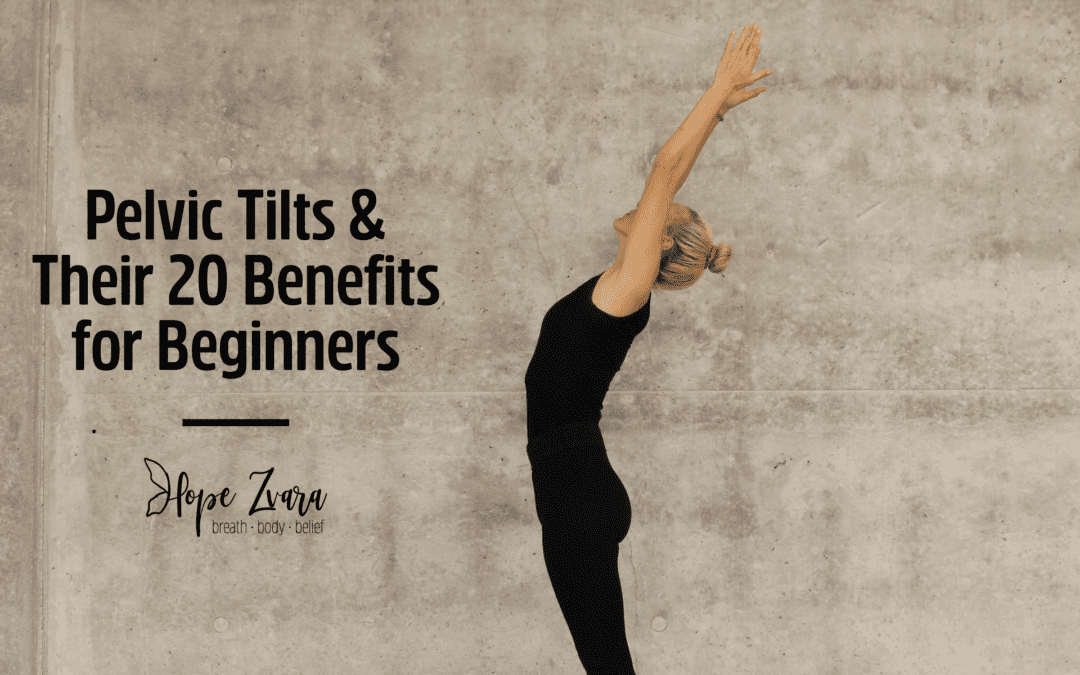 Beginners Core: How to do Pelvic Tilts.

What if reducing back pain, increasing core awareness, and strength. Reducing hip pain and aiding the natural curves in your spine “were” easy to do?

It has been brought to my attention on more than one occasion that we as a society often overlook the power of simplicity. Is it that we are lead to believe that if something isn’t complicated? Or expensive or taught at a fancy center that it cannot truly be helpful?

I occasionally have students mention that they are off to PT for this or that. Only to find that what they are being told to do are the very things they are learning in my classes. And the therapists are amazed at their sense of awareness and ability. Now, this is not to toot my own horn. But rather push my point that sometimes we don’t realize the power of something until we step away from it.

And the same goes for simple movements.

Have back pain? Who doesn’t?

Struggling with your, ahem, pelvic floor? You’re not alone.

What if there was something you could be doing right now to help those areas improve?

Would you be O.K. with the notion that the approach was simple, elementary, small and lacks a fancy name and does not end in a complicated arm balance? Would that be O.K.?

Sometimes to truly take a step forward, we do in-fact have to take a step back, and that is where pelvic tilts come in.

Not in the sense that we are losing ground or less than, but rather that we are in deep need to create a deeper sense of awareness and understanding of our body and how it moves.

Pelvic tilts truly are one of my most favorite moves, and I often think of it as a secret weapon! This small movement packs a powerful punch! That it simultaneously free your lower back release your hip flexors. In addition, pelvic tilts improve core function and awareness and ungulates your entire spine.

I know what you are thinking now, “where can you sign me up” for learning how to do pelvic tilts??

Except as a yoga and movement teacher for over fifteen years now I have learned that one: I was practicing pelvic tilting all wrong. And two: I see many following in my similar footsteps.

There are tons of benefits to pelvic tilting and it SHOULD be an exercise that everyone does regularly. Because you can do it in just about any plane of motion and position.

If you need a list of reasons WHY pelvic tilts are not just good for you, but necessary!

What are the benefits of Pelvic Tilts?

By now you are wondering how do you effectively and properly practice pelvic tilts?

How To Do Pelvic Tilts:

A few other tips about pelvic tilts:

As you become more comfortable with the movement, especially while lying down. Consider adding in the arms to the movement. INHALE and arch the back, release the pelvic floor, AND reach your arms overhead! STRETCH. Exhale and return back to the floor and contract the pelvic floor.

By incorporating the arms in you get more of a full spinal interaction. Plus, the hip flexors and lower back get even more limelight. Notice when reaching if one arm hits the floor and the other does not. This can easily become a tool for not only teaching pelvic floor activation and releasing the lower back. Which can also assist spinal and fascial assessment as well.

And learn about it NOW!

PPS Here is a great video I shot of an entire series of pelvic tilting, core integration, and full spinal release! Because everyone needs a visual!